The 10Micron GM2000 HPS II “Combi” German equatorial mount is a new product from 10Micron. It is the second mount in their equatorial mount line-up. Although it is heavier than its smaller GM1000 brother, it is still is a transportable, and very sturdy platform for your astronomical equipment.

This new “Combi” mount is basically a GM2000 HPS II Ultraport that is “splittable” in two parts, but features an additional locking system. This newly added locking feature is for those who will have the mount permanently installed in an observatory and will ensure long-term stability, comparable to previous GM2000 HPS II Monolith model. However, the mount can still easily revert to the Ultraportable (“splittable”) version simply removing the locking screws. The advantages of the previous GM2000 models still feature in this new GM2000 HPSII Combi mount which will now replace both the previous Monolith and Ultraport models. The technical specifications, sizes and weight of the new GM2000 HPS II COMBI are exactly the same as the GM2000 HPS II Ultraport.

The GM2000 “Combi” possesses the same high level of Italian engineering, craftmanship, build quality and features as its bigger brothers, making it an ideal portable choice for those wanting the best mount for doing astronomy and astrophotography.

The mount head has a weight of 33kg (73lbs; mount head only) making it transportable. However the mount separates into two components (see image above) weighing 18kg (40lbs) 15kg (33lbs) making this GM2000 “Ultraport-able” and easier to transport and carry. 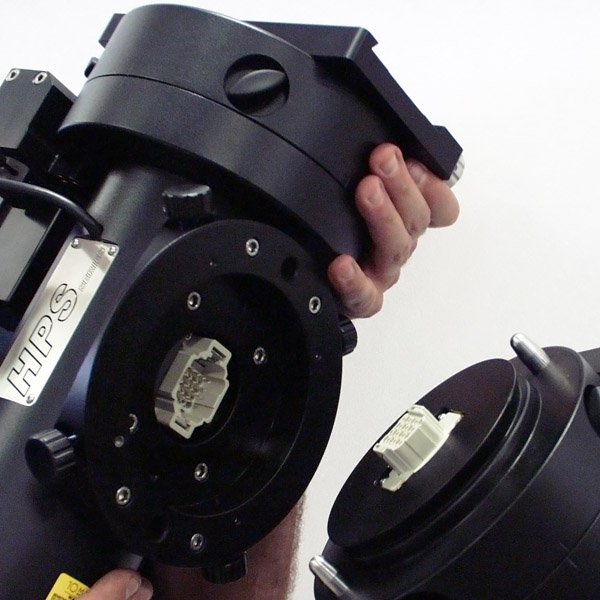 All 10Micron GM mounts come with a feature called HPS – High Precision and Speed – an innovation from 10Micron. They feature traditional worm and wheel pairs, and with the latest state of the art encoder technology allows these mounts to perform at the same level of precision as professional direct-drive mounts.

The diagram above shows the 10Micron GM mount RA tracking error profile measured with an encoder coupled to the RA axis. To show how accurate the tracking is, Jupiter and its moon Ganymede are shown as they appear from Earth at the same scale in arc seconds.

The high-speed slewing of the mount, from 2 degrees to sprightly 20 degrees per second, is achieved using high performance servo motors.

The GM2000’s Right Ascension and Declination axes, both of which are made of 50mm diameter alloy steel (for maximum rigidity) are driven by two servo brushless AC motors, with a belt drive reduction with automatic backlash recovery that results in a backlash-free system. Both axes feature classic worm and wheel pairs; the worm wheels are made of (B14) bronze, with a diameter of 172mm and with 215 teeth. Each worm is 24mm in diameter and are made of alloy steel.

The mount features a dual Vixen/Losmandy type dovetail mounting saddle clamp. This allows the mount to have a wide compatibility with many telescopes from different manufacturers. Once you have mounted your telescope and equipment onto the mount, you can then use the electronic balance function to achieve perfect balance in both RA and DEC without unlocking the clutches.

The GM mounts can track 30 degrees/2 hours past the meridian and means that long duration astrophotography is easily achievable. The absolute encoders allow extremely high tracking accuracy (<1 arcsec), and means that autoguiding is not necessary. However, the GM mounts do allow the use of an auto-guider, if needed, through the inclusion of a standard ST4-compatible guide port.

The built-in object database contains celestial objects from the major astronomical catalogues (e.g. Messier, SAO, NGC and more) down to 16th magnitude. The mount’s tracking rates are adjustable depending on the object being studied and the orbital elements of comets, asteroids and even artificial satellites can be loaded directly to the mount (without the need for an external PC), so that these celestial objects can be followed across the sky accurately.

A PC is not required to operate the mount as GM mounts can be controlled using the supplied weatherproof 4-line control handset keypad, with the computer’s electronic “brain” being housed in an independent portable external control box. 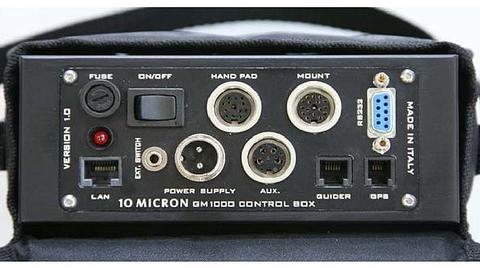 The handset’s display and the large ergonomic keypad (ideal for when wearing gloves), features a red backlight for ease of use in the dark. An internal heater keeps the handset display warm when the mount is being used at low-temperatures which allows for maximum readability in all temperature and lighting conditions.

The connectors of the motors, encoders, power and handset all use security lock screws for robust and secure connection.

If you wish to connect your own PC to control the mount, a WiFi, RS-232 or Ethernet connection is needed. The GM mounts can then be controlled using commonly available software packages via the proprietary 10Micron ASCOM driver (or Meade compatible command protocol). Included with the mount is software that creates a “virtual handset” on your PC with the same functionality and features as the physical hand set for easy (and familiar) control from your computer. Furthermore, the RS-232 port on the external can be utilised to control an observatory dome (and without a PC). The mount can also be parked in different user-defined positions in case of any internal “obstructions” and can also be switched on and off using the dedicated connector on the control box panel.  All these features help make the GM HPS mounts ideal for observatories and for remote operation.

Please note: Counterweights, Dovetail clamp, tripod and power supply are not supplied as standard with this package. They are available separately, or as part of the Professional accessory upgrade package (#1452026U) which also includes additional items.